At the beginning of this year, RED Digital Cinema dropped the news that they were going to simplify their lineup to just three cameras: the DSMC2 Monster, the DSMC2 Helium, and the DSMC2 Gemini.  Now, they have added a fourth to their product lineup: the DSMC2 DRAGON-X 5K S35 Brain.

RED wants their users to stray on track, but with every new model they released, that seemed to get more and more difficult.  Because of that, RED ‘s CEO Jarred Land decided to simplify the portfolio a bit and offer only three camera models based on the DSMC2 body.

RED: “We simplified our portfolio, found efficiencies, and are passing along the benefits to our users. The full potential of the DSMC2 BRAIN is available to all—just choose your sensor based on the resolution and optical format you need.”

The DRAGON-X features the industry workhorse and award-winning DRAGON sensor, now with IPP2, delivering 5K cinematic imagery in a Super 35 format. It will shoot 96fps at full resolution (5K), before cropping the sensor down in increments to 240 at 2K. A DSMC2 Brain is capable of data write speeds of 300 MB/s, and can simultaneously record in REDCODE RAW and Apple ProRes or Avid DNxHR/HD. 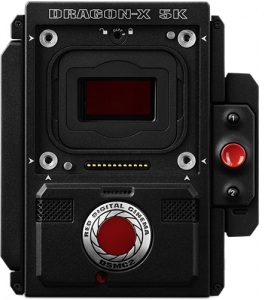 It is available either individually or as a full kit.