Netflix, Inc. is an American-based streaming platform that deals with the rental and production of films and series. With currently just under 5,000 titles, Netflix is ​​considered the most well-known VoD provider worldwide. Since 2012, Netflix offers its own productions, the so-called Netflix Originals. But what exactly does a documentary or a feature film need to meet the specifications of Netflix?

You can find the following in the Backlot-Help on the Netflix homepage. Here you can see all the conditions and technical specifications for a Netflix production.

First is the choice of the camera. Netflix provides a list of all allowed cameras that you can use for your production. These include Canon’s  C300 MKII, C500, as well as the C700, the RED  Dragon, Weapon and Helium, the Panasonic Varicam series, Sony’s  F55, F65 and FS7, and the two Blackmagic Design cameras  URSA Mini 4.6K and URSA Mini Pro 4.6K. Deviations (also for use as a secondary camera) must be discussed in advance with Netflix. This also applies to all aspect ratios beyond 2.00: 1. Only cameras whose sensors can do native 4k (at least 4096 × 2160) may be used. But that also means that some well-known film cameras, such as the ARRI  Alexa and Amira, are excluded. The reason for this is that all Netflix Originals deliver UHD 4K, and there should be no exceptions here, as customers that use Netflix have to pay a certain amount of money each month, which is why Netflix only wants to deliver content that will do its customers justice.

Another reason for this is that Netflix wants to be “future-proof” – since 2014, more and more TVs with 4K HDR are coming onto the market. The TV production itself is still far away from producing in 4K though, let alone exclusively in 4K. Therefore, Netflix wants to provide a quality that the classic television production can not compete with yet technically, but most TVs can represent.

The recording format must be at least 16-bit linear or 10-bit for logging, with a bit rate of at least 240 Mbps at approximately 24 frames per second. It can be recorded either RAW or in one of the approved log color spaces of the above cameras, so S-Log3, Canon Log3, V-Log, LogC, etc.).

Netflix not only specifies exact specifications for production, but also for post-production. For these, Netflix recommends ACES, the Academy Color Encoding System. The Flowcharts provided by Netflix make one thing clear: HDR is an integral part of production and has its place in the production process even when using RAW. Although HDR is not a necessity yet, it is a creative decision, according to Netflix, because: “Some projects benefit from it more than others, based on the story and visual intent.” That’s why the streaming service supports HDR on every Netflix Originals project.

Example of a flowchart: 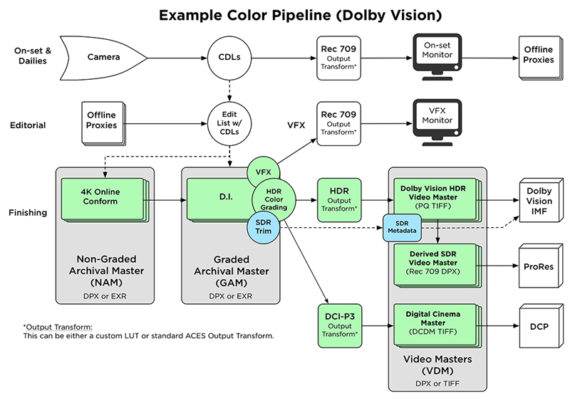